FRANKFORT (AP) — Kentucky’s ban on medical marijuana has survived an initial test in court, with a judge ruling Wednesday that the state has a good reason to “curtail citizens’ possession of a narcotic, hallucinogenic drug.”

Twenty-nine other states have legalized marijuana in some way, the most common being for medical purposes. While Kentucky lawmakers have embraced hemp — the fibers of the plant that are used to make rope, clothing and other products — and other uses for the cannabis plant, they have failed to consider a number of proposals that would let people use marijuana as medicine.

Frustrated, three people sued the governor and the attorney general earlier this year and asked a judge to throw out the ban because “denying sick people safe medicine” is unjust.

Franklin Circuit Judge Thomas Wingate rejected that argument, ruling the state had good reason to ban the use of marijuana. He also said the state legislature has “discretion to regulate what is harmful to the public health and wellbeing.” He told the plaintiffs their only option was to persuade the state legislature to lift the ban.

“The Bevin Administration applauds Judge Wingate’s decision to follow the law and dismiss this lawsuit,” said Woody Maglinger, a spokesman for Republican Gov. Matt Bevin. “Any change to Kentucky law should go through the legislative process.”

The people who filed the lawsuit could appeal the ruling. Their attorney, Dan Canon, said they have not made a decision yet.

“We respect the court’s decision, but we strongly disagree with it,” Canon wrote in an email to The Associated Press. “Our clients have said all along that they want the government to stop intruding into the relationship between them and their physicians.”

The plaintiffs all say they use marijuana as medicine. Amy Stalker said she used marijuana with a prescription while living in Colorado and Washington state to treat irritable bowel syndrome and bipolar disorder. She said she has struggled to maintain her health since moving to Kentucky to care for her mother.

Seum Jr. said doctors prescribed him Oxycontin, an opioid-based painkiller that is highly addictive and had led to a surge of overdose deaths in the state.

“I don’t want to be addicted to those type drugs,” Seum Jr. said. “Although cannabis, it doesn’t take (the pain) away completely; it allows me to function a little more. I can function and still not be addicted.” 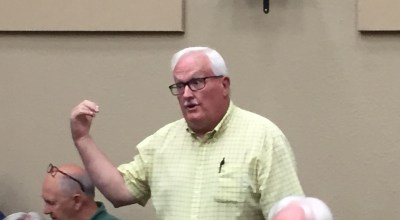