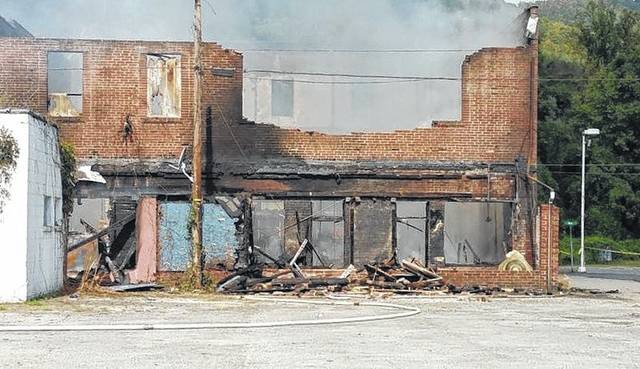 The building which once housed Maynard Hardware in Cumberland was severely damaged by fire Wednesday evening.

A longtime Cumberland landmark building was damaged by fire on Wednesday.

According to Harlan County Emergency Management Director David McGill, the building which housed Maynard Hardware for years in Cumberland was severely damaged.

“From my understanding, the building had some issues already and wasn’t structurally sound,” McGill said. “It had been abandoned for quite some time.”

McGill said he received the call informing him of the fire at 7:53 p.m.

“I got a call from Kentucky State Police advising that Maynard Hardware in Cumberland was on fire and was fully involved,” McGill said. “Cumberland Fire Department was paged out.”

According to McGill, protecting other buildings was a high priority for the firefighters at the scene.

“They wanted to protect the surrounding structures because that building was in such bad condition,” McGill said. “That was the safer option.”

McGill stated the firefighters on the scene did an exceptional job handling the fire.

“The Cumberland Fire Department did an excellent job protecting those other structures and knocking the fire down quickly,” McGill said.

McGill said the street was closed for safety reasons.