Yocum Creek up and running 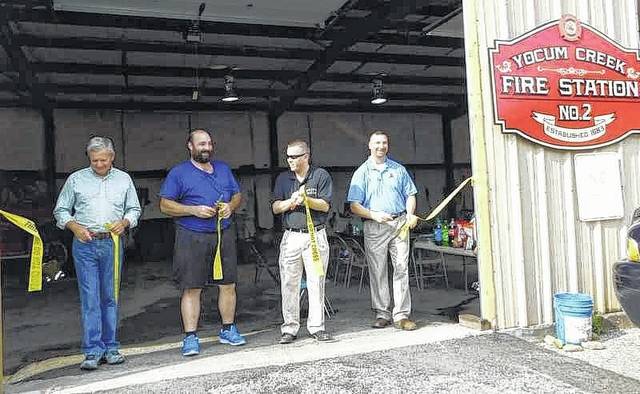 The Yocum Creek Fire Department held an open house and ribbon cutting ceremony on Saturday to make the public aware that the department is up and running and ready to serve the community. According to Fire Chief Joe Wynn, the Yocum Creek location has been in operation since late 2016, however not many people realize it.

“We have been open for several months now, but there are a lot of people who don’t know it,” said Wynn. “This ribbon cutting and grand opening to the public is a means of making sure everyone is aware that we are here and ready to serve the needs of the people.”

Wynn said the Yocum Creek Fire Department had been closed for a couple of years prior to last fall due to being shut down by the state. He added that during the time the station was nonoperational the residents were being served by Harlan Fire Department and the Black Mountain Fire Department.

Wynn, who also serves as the fire chief of the Black Mountain Department, said it has taken some long hours of work and efforts by the volunteers to get the Yocum Creek Station No. 2 up-to-date and ready for service.

“Everyone has really worked hard to get the station ready and all the hard work has paid off,” Wynn said as he displayed the new exterior fire doors to several county officials.

District 2 Magistrate Bill Moore said the efforts of the volunteers showed greatly and that he was proud of the work that had been done towards the reopening of the fire station.

“Everything just looks great and the community can now feel safer knowing they have a new station,” said Moore.

Harlan County Judge-Executive Dan Mosley said he was very impressed with how the volunteers had pulled together and brought the fire station up to standards.

“I don’t live in this community, but I do know how important it is to live in a community where there is access to a fire department,” said Mosley. “It sure makes you feel safer knowing they are available if you need their service.”

Mosley added that he also commended the men and women who had pulled together in their efforts to restore and reopen the station.

“While the station has already been open since around November or December of last year, this grand reopening will help get the word out to the public,” said McGill.

The opening and ceremony yielded numerous visitors and residents who were served with refreshments and snacks.