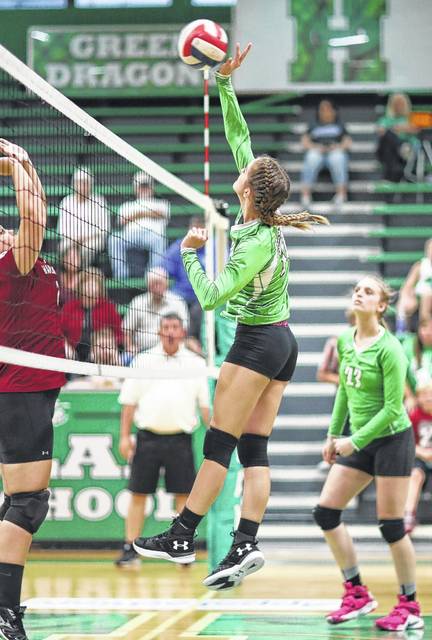 Harlan senior AnnMarie Bianchi went to the net to finish off a point in Monday’s three-set win over visiting Harlan County that helped the Lady Dragons clinch the top seed in next month’s 52nd District Tournament. Harlan is playing in the All “A” Classic state tournament this weekend in Florence.

The Harlan Lady Dragons locked up the top seed for next month’s 52nd District Tournament with a 25-14, 25-10, 25-15 victory Tuesday over visiting Harlan County.

Harlan improved to 10-8 overall and 5-0 in district action with one match left against Middlesboro. The Lady Dragons have lost only one set against district opponents.

No statistics were available on the match.

“The girls played as a team and did a great job,” Harlan coach Tara Posey said. “Ai-yana Harriston did an awesome job serving. I think she served 10 or 12 in a row the very first set. Our sets are getting better, so our hitters can get some good swings at the ball. I can’t say enough good things about this team thus far. The come in every day ready to work and get better.”

Harlan (10-8) will play in the state All “A” Classic over the weekend in Florence. The Lady Dragons will play in Pool B, taking on Bardstown at 8 p.m. on Friday and Caldwell County at 8:45. Harlan will play Whitesville Trinity at 9:45 a.m. on Saturday.

The Lady Dragons will play at Middlesboro on Tuesday.

“Our service game was the difference tonight,” HCHS coach Stacy Noe said. “When you can that well it always gives you a chance to win.”

HCHS was given a boost by the return of senior Sophia Sergent from an injury.

The Lady Bears start a stretch of seven games in seven days on Monday at Thomas Walker, Va.