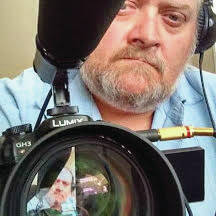 Bill Lancaster is pictured with his camera.

A grassroots film project that began in Harlan this past spring has quickly captured the attention of academia, outdoor enthusiasts and television associates throughout the nation. What started out as a “better now than never” film project for Bristol, Tennessee resident Bill Lancaster has evolved into an undertaking that has not only given wings to a longtime dream of his, but has also begun to introduce to American society a community of people whose beliefs are just as big as the creature they chase.

Lancaster, a healthy vending machine stock business owner and aspiring filmmaker, first started shooting footage of his work-in-progress documentary “Cultured Bigfoot” in March when local Cryptozoologist and author Michael Cook of Cook Cryptid Gear gave a Sasquatch presentation at the Harlan Library. Lancaster came to Harlan to film and interview Cook, and now — almost six months later — he has filmed over 20 people actively involved in researching and pursing the longtime American legend. Through his filming, Lancaster has gone much farther than relaying information about the elusive beast. His concentration has been on the people — from professors who hold PhD’s to janitors — all of whom share a passion for finding Bigfoot. Lancaster has called his film documentary “Cultured Bigfoot.”

“For me, it’s not about running through the woods with my night vision on my camera trying to document something that’s seldom seen and few people believe in,” Lancaster said. “It’s more about filming the people, themselves, who do believe, who do the chasing, who do the countless hours of researching, and who are passionate about it all.”

Lancaster will be the featured speaker at September’s monthly meeting of The Harlan County Arts Council, which will be held Monday, beginning at 7 p.m., in the conference room of The Harlan County Cooperative Extension Agency. The public is invited to attend, and refreshments will be served. Lancaster will be talking more in depth about his “Cultured Bigfoot” documentary, but he will also touch on viewing video as art during his presentation, and sharing how want-to-be filmmakers can make their work known and more accessible to the public.

“We’re happy to have Bill as our guest speaker this month,” said Harlan County Arts Council President Jennifer McDaniels. “Bill is very artistic, and is a go-getter when it comes to pursuing his art. He’s an award-winning photographer who is currently putting his talents to use as a filmmaker. It will be interesting to learn more about the Bigfoot community Bill is documenting, but equally as interesting will be the advice and motivation he will give to those out there who are interested in film work.”

Lancaster has been working non-stop with his wife, Amy, since the spring on filming “Cultured Bigfoot.” They have traveled to many Cryptid conventions, and have scheduled interviews in several states. Lancaster credits his wife for encouraging him not only to pursue the documentary project, but to also pursue his artistic capabilities. He recalled before they were married, he received a Christmas gift from her with money and a note inside a box.

“The note inside told me to buy an upgraded camera for myself,” Lancaster said. “It also said if I used the money on her, she would leave me. We laugh about that, but I can honestly say that my wife has truly been my source of inspiration to pursue my art.”

Both Lancaster and his wife have also always been interested in Comic Cons, Sci-Fi, and myths and legends. They often listen to podcasts about these subjects while traveling. On one certain road trip, the couple was listening to a podcast about Bigfoot, and the idea was born for his “Cultured Bigfoot” documentary.

“I’ve always been into photography, but something I always wanted to do was film work, too,” Lancaster said. “I am proof that it’s never too late to pursue your interests and your art. This whole process has been a learning experience for me, but it’s making me a better artist and it’s giving me a certain satisfaction that can only come through being creative, not being afraid to make mistakes, and through being adventurous. It’s a huge world out there, and there are so many stories to artistically tell.”

The story in which Lancaster is currently enraptured is the community of Bigfoot chasers and researchers — or more commonly known as “Squatchers.” This dedicated group or “culture” of people has fascinated Lancaster and his wife, and they are anxious to get their story out on film, hopefully by winter. It is the keen interest of these “Squatchers” — along with their tireless efforts to find proof as well as their camaraderie — that Lancaster has noticed most, and hopes to convey in his documentary. He also said being a “Squatcher” was a unique way to connect people who would more than likely have nothing to do with each other socially or professionally.

“You have doctors who are researching this field, and the janitors who come in and mop their floors who also have sighting experiences and stories,” Lancaster said. “Their drive and sheer determination to find this beast has been a strong connecting component that has created a most unique culture, and I consider it a privilege to document this culture of ‘Squatchers.’”

Lancaster said one of the things he’s realized the most through his documentation efforts is that the Bigfoot community is very large, but small, too. He went on to explain that there were “Squatchers’ all over the nation — really all over the world — but that they were a close knit community that was mostly found linked on social media.

In the midst of documenting a group of people who have set out to find something, Lancaster is finding himself also being sought. His work has got people talking, and the scope of his project has elicited heightened attention to the Bigfoot world, and to the art of his film

work. He has been in communication with television associates interested in his work, and has also been scheduled to speak at a growing list of Cryptid conventions regarding his documentary. Renowned Bigfoot researcher, filmmaker, and author Thomas Marcum of The Cryptid Crew described Lancaster’s film as “a unique approach in documenting the Bigfoot community.”

“Instead of focusing on Bigfoot itself, he dives into the people, like me, who actually hunt it,” said Marcum, who appears in Lancaster’s film. “I hope people will realize after meeting him Monday and listening to his presentation that we’re not crazy, that we have a real passion to unravel this complex mystery, and that the phenomena of Bigfoot is real.”

Sam DeLoach, a Kingsport, Tennessee Bigfoot researcher who heads up Mountain Empire’s Cryprid Research team in Virginia, is also featured in Lancaster’s documentary. DeLoach said Lancaster’s talents behind the camera was impressive, considering he was new to filmmaking, but what impressed him most was his sincerity.

“He believes in us and what we are doing,” DeLoach said. “He brings to the table a true respect for the ‘Squatcher,” and is determined to tell our story accurately, but with sincerity. Bill might just consider himself a filmmaker now embedded in the culture of the Bigfoot world, but he is one of us now — and he’s my friend. It’s been my utmost pleasure to work with him on this documentary, plus our YouTube series.”

Whether Lancaster believes in the existence of Bigfoot is not the purpose behind his plight. While Lancaster does say, however, it is easier to prove Bigfoot does exist than doesn’t exist, his search is for something deeper, and that’s the unique ties that bind people in an otherwise divisive world. If one day Bigfoot is officially discovered and scientifically categorized, then Lancaster said he would be thrilled. If that never happens, then in the process, Lancaster feels he’s been a part of something greater that this mysterious beast has bestowed, and that’s the power of finding common ground. That is something Lancaster definitely believes in, and he’s conveying this belief through the art of film.